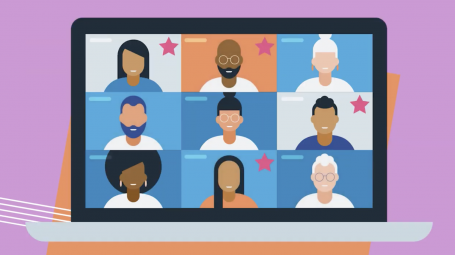 One year into the pandemic, and virtual events and online screeners are starting to feel pretty normal. That was our takeaway from the recent London Screenings, which have been digital only for the second year in a row. MIPTV will also be staying as a virtual event in 2021.

We pondered what the future of these events might be back in November last year, and this seems a good point to see what has changed and what is working. Certainly the big studios and distributors seem to have a better handle on how to showcase their wares in this remote format. ITV Studios, for example, impressed by digitally compositing host AJ Odudu next to Maarten Meijs for a Q&A session as if they were in the same room. An illusion of normality, perhaps, but one that actually felt like a traditional live event rather than yet another Zoom call.

Also helping to make the London Screenings feel substantial was the decision to stagger sessions and screenings throughout the day, allowing for attendees from different time zones and giving the experience a sense of structure that is easily lost when everyone is logging in from home.

Credit, too, for the presentations which understood that people’s time is actually more precious when they are attending from home. With no bar to meet in, no show floor to browse, the lengthy catalogue presentations of old feel bloated and indulgent when viewed on a laptop. We noticed that many have wisely kept their showcases to an hour or less, allowing the shows to speak for themselves.

Naturally, we all hope “back to normal” will come sooner rather than later, but even under the best circumstances it seems prudent to assume that we’re still a long way from international flights and thronging convention centres.

Many an opportunity or unexpected lead has been discovered outside of scheduled meetings in person, and no virtual event has yet found a way to replicate that organic networking magic.

What these shows lack is, of course, the social factor. This is much more than just the chance to catch up for drinks with colleagues. Many an opportunity or unexpected lead has been discovered outside of scheduled meetings in person, and no virtual event has yet found a way to replicate that organic networking magic.

Online events are also a poor substitute for the smaller companies, who rely on event floor word-of-mouth and casual footfall to attract attention. The bigger entities know that people will want to make time to check out their announcements but for companies just starting out discoverability is a real issue now more than ever.

Paul Heaney and Dina Subhani’s new company BossaNova staged its own event back in January, showing that sometimes standing out from the crowd means leaving the crowd altogether. Speaking about the event, Paul Heaney tells us ‘We didn’t think we could pull the whole thing off as we had done so successfully at TCB since 2015 but we knew as a start-up we had to find a way to rev up the engines and get some projects bubbling away. Once the buyers started responding to the invitation we knew we had an event on our hands. 53 buyers, 77 projects, 29 producers, across a 10 hour webinar, it was a tribute to Jasmin, our colleague for setting it all up online and making it happen so beautifully and to the buyers, many of whom stuck with the whole day. It has breathed oxygen into BossaNova’s first few months and given us a tremendous selection of projects to support’. We expect to see more of this sort of thing, as companies realise that it can be better to deliver your message to a captive audience rather than compete with the fanfares of rivals whose own presentation is only one click away.

Other industries have faced this splintering, even before COVID. The games industry used to congregate in Los Angeles every spring for the Electronic Entertainment Expo, until giants like Sony and Electronic Arts decided to save the money they would spend on a gigantic booth and spend it on a bespoke event dedicated solely to their titles. When flights and conventions reopen, it may be that some of television’s heavy hitters have made the same calculation. After all, media giants are currently fencing off their consumer-facing products on their own-brand streaming services, so why not apply the same logic to B2B activities?

We hope that won’t be the case. The K7 team wants to get back on the road, meeting our friends and colleagues at the many industry events we know and love, but realistically mass events are a distance away yet – and there are no guarantees that they will be the same as we remember when they do.