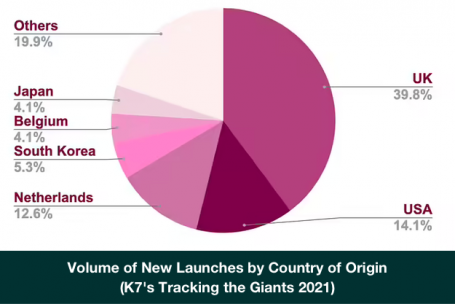 The success of many high-profile Asian formats over the past few years has cemented Asia as a hub for creative new unscripted ideas. South Korea, which has received most of the buzz recently, remains in the top four biggest exporters along with the UK, the US and the Netherlands. Meanwhile, Japan made an impressive comeback with the number of new adaptations of Japanese formats more than doubling year-on-year (K7 Media’s Tracking The Giants 2021).

Nowadays South Korean and Japanese formats are not only made for a domestic audience but also for a global market. Formats that fit international trends have a greater chance for export, but as we’ve seen, The Masked Singer led the craze for guessing games and buyers are eyeing closely every latest idea from these two countries. Running on the 7th and 8th December respectively, the Fresh Format From Japan and K-Formats Showcase sessions were some of the most anticipated at ATF. But beyond just collections presented by distributors, these carefully picked titles reflect how the two countries have been exploring new twists and directions while retaining their positions as Asian superpowers of the format space.

My Boyfriend is Better from CJ ENM proves that musical guessing formats are still going strong in Asia. Launched earlier this year, the format sees girls betting on their boyfriends’ singing abilities. It places a fun and dynamic twist of love and money on top of the familiar guessing game, expected to be the next hit from CJ ENM after its best-selling I Can See Your Voice.

While that CJ ENM show has a familiar musical focus, Kansai TV’s Matching House and Something Special’s You Picked The Wrong are examples of how the guessing mechanism has now expanded to other genres. The former is a dating show which matches people based on their homes, whilst the latter sees a contestant picking one of 10 opponents for a physical challenge without knowing their opponent’s hidden abilities. dI turn’s paper format Two Doors also puts players in a fight-or-flight dilemma and if they choose to fight, then they have to guess which of the two rooms in front of them is easiest to escape from within 89 seconds. Around the market for a while, but remaining relevant is MBC’s Mystery Ranking Show 1,2,3!, tapping into the same notion of whether our prejudices and judgements are valid.

IN CELEBRATION OF THE ASIAN LOVE FOR COOKING

Moving away from the topical guessing game, it’s worth shedding light on the latest food formats from Japan, as one third of the fresh Japanese formats introduced come under the cooking genre. YTV, whose Rolling Kitchen has been adapted in Mongolia and Brazil, brought to the market Uprising Kitchen, a gamified approach to the classic debate – whether the chef or the quality of ingredients is more important in cooking. In Discover Japan In Your Fridge, ABC TV shows off Japanese cuisine using ingredients found in the fridges of random  households elsewhere in the world. On the same ‘Chefs Without Borders’ theme, The First Recipe from TV Tokyo challenges star chefs to cast their spells on unknown ingredients that they have never seen before.

Cooking is an integral part of Asian life and culture, and has always been a staple of Asian TV. With both international cooking franchises and home-grown shows riding high in Asia, ATF is a perfect platform to promote cooking formats. It would be no surprise if these Japanese titles, with their exciting take on classic culinary skills, soon land deals with buyers from the region.

We’re living in a world in which the unexpected can happen anytime, and sometimes last much longer than expected – think about the pandemic. To get through hard times, it’s important to remain positive and remember to laugh. That’s why formats that are suitable for family viewing and likely to bring us a good chuckle always have a place on television.

Japan, with the likes of Masquerade, Silent Library and LOL, has built up its reputation for ‘wacky’ but effective approaches to the genre. This year, ATF welcomed the country’s freshest comedic titles – from Fuji TV’s travel-meet-prank show Prank Journey to Yoshimoto Kyogyo’s latest iteration of the no-laughing trend with You Laugh You Lose, Chukyo TV’s investigative We Can Answer Your Question!, TBS’ Totally Outnumbered which sees a professional trying to beat a group of ordinary people in a limited time, and TV Asahi’s Sneak n Shop featuring players sneaking into a large electronics store and carrying the appliances to the checkout while avoiding drone cameras.

All of these amusing formats are expected to meet the appetite of not only Asian buyers who share the same passion for comedy, but also Western participants at the event who are looking to adapt the next surprisingly ‘out there’ Japanese formats.

CHOIR SINGING – WILL IT BE THE NEXT BIG THING?

From singing guessing games to idol survival auditions, Korea has been leading music unscripted trends in Asia. With two Korean broadcasters both bringing their own choir competitions to the Showcase, it’s time to keep an eye on this re-emerging theme in the music genre. Sing for Gold from SBS is a competition in which K-pop stars pick the best national choir for an international contest, while Singing Seniors from SLL is an experiment in harmony with no eliminations, winners or losers – just veteran actors singing their hearts out in a choir.

Meanwhile, launched on SBS (Korea) in October, Pet Me Pick Me from FormatEast sees four women each date a man chosen by none other than their pets! It’s a prime example of the ‘Dating by Committee’ trend that is everywhere at the moment, showing how modern romance values the expert consultant – regardless of whether it’s friends, family members, a kid, or even a dog or cat…

Another rising trend in global unscripted is the surge of physical adventure shows, maybe as compensation for the years trapped indoors that we’d all rather forget. In this context, Survival Hunt from Something Special, debuted on Kakao earlier this year, is expected to make a big splash, especially including as it does the spooky reality element inspired by Squid Game.

Finally, Kakao’s Nomovie Series is an innovative cross-platform format that attempts to exclude all the boring parts of traditional drama and films. It has proved to be a huge success locally with accumulative number of over 131 million views as of November 2022!

We are coming to 2023 with new trends and directions in unscripted formats. What will come out of these showcases as the next biggest star? Time will tell. But one thing we can be sure is that South Korea and Japan will remain regional innovative hubs and great inspiration for format creators from other countries across Asia and beyond.