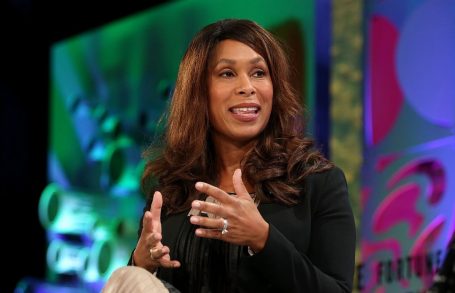 Last week saw the tenth edition of Content London take place in the UK capital, with K7’s Keri, Clare, David and Richard all in attendance.

In terms of scripted, while the bubble maybe hasn’t ‘burst’, there was certainly a sentiment that it was in the process of ‘deflating’ to a more manageable size. Keynotes from both Warner Bros Television Studios’ Channing Dungey (pictured) and Fifth Season’s Chris Rice both said that mega-budgeted $10-15m per episode series are likely things of the past.

In terms of what we’ll all be watching in the coming years, there was a feeling that lighter, hopeful, more ‘cozy’ and ‘joyful’ drama would prevail owing to the pretty dark state of the world right now. We can also expect to see more historical and nostalgia-inspired series. Local scripted will remain key, on linear and increasingly on streaming too.

Meanwhile, the conference also highlighted a new vigour for cost-sharing co-productions, and the increasing willingness of the SVODs to windowing lenience and sharing rights. AVOD and FAST were other acronyms that got a lot of stage time.

Content London has traditionally focused more on scripted, but this year there was a concerted, and fairly successful, effort to ramp up the unscripted side of the event. But with the two genres split across two sites there was a distinct ‘us and them’ feel, with unscripted producers relishing the opportunities being delivered to them in the economic downturn, while their scripted counterparts were bemoaning the financial squeeze. In the opening session on 2023 Content Trends, Richard Broughton of Ampere Analysis showed clear data that scripted is currently ceding to unscripted.

As a result, broadcasters are feeling emboldened to take big swings with unscripted formats. Banijay’s James Townley talked of the hours of primetime their revival of Star Academy is filling on TF1 currently; the BBC’s Kate Phillips highlighted the thrice weekly scheduling of their version of The Traitors; and Warner Bros’ Mike Darnell pointed to the big swing NBC is taking with a two week primetime strip of The Wheel over Christmas – something that’s not been done for fifteen years.

Reboots were also a hot topic, with Darnell reminding us that “Buyers have always wanted the familiar. But they’re never a smash. It’s ok to have some of that stuff but you HAVE to take the big swings to get a Masked Singer.” And a pointer from Virgin Ireland’s Bill Malone went down well at one session on European unscripted commissioning: “We do existing formats like Love Island and Gogglebox, and reboots, but we are always developing new stuff too. We try for one in every three as our formula – two safer ideas and one risky.”

In terms of successful unscripted genres, Amit Devani of Parrot Analytics pointed to sports documentaries as the fastest growing genre after true crime; while Kelly Webb-Lamb said her new indie Mothership would be focusing on the “same thing ALL the UK broadcasters want right now: big Factual Entertainment ideas that say something about the world.”

But in the end, many of the panels came back to the inevitable subject of cash. Fox’s Rob Wade elaborated on how many US shows were now being produced abroad for cost reasons (“We can do full series internationally for the price of a US pilot, so we are… in Germany, Thailand, Ireland, the UK.”). And a panel entitled Unscripted: Where’s the Money produced a lively discussion about whether there would be any content or profit left for distributors, now that broadcasters and producers alike were setting up co-production deals and pre-sales themselves just to get shows off the ground. As Greenbird’s Commercial Director Camilla Cope put it: “When I started at Greenbird nothing needed deficit financing, now everything does.”

If the picture was a little rosier than over in the scripted venue, the commercial challenges remained inescapable for all those attending.