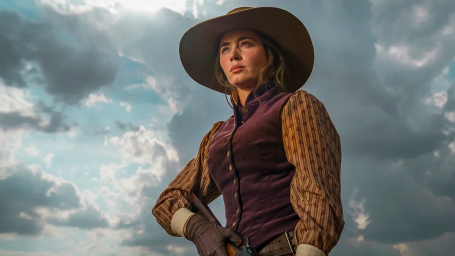 We love a period drama here at K7 (I mean who doesn’t?), and it feels like we have our watch lists full of them at the moment. What an early Christmas treat! The savvy eyed scripted specialists out there might have noticed last month’s scriptlist showreel contained no less than seven period dramas. Each transporting viewers to days gone by (as near as the nineties and far back as the 1800s) in a variety of guises – from a thrilling romp around America’s wild west in The English to the rise of French hip hop in Netflix’s Reign Supreme.

While linear viewing figures dwindle and the way we watch evolves, switching off by switching on the telly remains as intrinsic to our psyche as ever. And to be sure, period and historical dramas are, put simply, one of the best forms of escapist television. It’s little surprise that we take comfort indulging in events of the past when faced with a rather uncertain future in our own present.  Perhaps the more recent true crime titles don’t quite fit that brief as well as the glittering costume dramas, so distant from modern existence, but absorbing oneself in a world that is a world away from right now is enticing. The same goes for any strong world building concepts (shout out to our fantasy favourites), but when something is at least tinged with truth, it’s extra appealing. We can’t be the only ones going down a Wikipedia rabbit hole for every other side character appearance in The Crown?

Speaking of, Netflix’s royal ratings winner is back with a bang, with yet another oh-so-addictive fifth season. It’s creeping towards our present, very much tackling events in the living memory of the majority of the population. That of course comes with its own set of problems, with questions looming over Netflix’s disclaimer-less dramatic license in covering real events (see our article here). For some it no doubt loses a little magic of the first season. Nonetheless, a tip top cast (may as well just give Elizabeth Debicki all the awards now) makes it a well worthy watch. For those after a more historical royal fix, look no further than our latest obsession, The Empress (another Netflix number) – a German original that will leave you at a loss for “what to do now” after binging its six episodes in two days flat (a second season has been confirmed so we can all relax). RTL too has its own drama Sisi exploring the life of the young Austrian queen, which by all accounts has been a local knockout and is also coming back for a second run.

Amidst a plethora of shocking fact-based dramas with international scale being pushed at October’s Mipcom, period dramas – whether historical or fictional – were hard to not notice. Tones varied of course, from indulgently scandalous fare (Mary Antoinette) to weightier dramas observing the past with a more critical eye (The Confessions of Frannie Langton), and ever-popular novel adaptations (Dangerous Liaisons). Series like Cuba Libre, set in the beautiful but dangerous 1960s Havana, meanwhile offer viewers a dose of escapism away from the genre’s usual high society or indeed royal backdrops.

It’s intriguing that Netflix’s latest adaptation Persuasion – received criticism for trying to be too modern. It seems we want to be thoroughly, and for a large part accurately, transported to different times (which can still be relatable and hold relevant lessons for today). That’s not to decry dramatic license or fictionalised stories – Bridgerton is neither historically accurate or even historical? – but nonetheless provides the escapist nature of a different era, with the different customs, culture and language that entails, even in the most romanticised form.

But of course, within the escapism there are lessons to be learned, whether on race, gender inequality and class divide. Or in the more literal historical dramas, how our current society came to be. Perhaps therein lies the appeal of historical drama and indeed factual/true crime drama as a whole. There’s a dash of learning (sans effort) and educational flavour – whether historical, sociological or in the literary sense – that elevates viewing experience.

And if that’s got you itching to fill the long winter months with glittering costumes, incroyable sets, courtship and scandal, fear not! For there’s plenty of choice to fill your stockings. For modern history fans, the BBC’s SAS: Rogue Heroes is just the ticket; for those outside the UK, the series sold widely to the likes of HBO Max in Europe and SBS down under so you’ll most likely be able to get your mitts on it. And if you’re desperate to fill a Jack O’Connell shaped hole post-SAS, head over to Netflix for some sizzling screen action opposite The Crown’s Emma Corrin in a steamy adaptation of Lady Chatterley’s Lover.

Of course, there’s plenty of stateside launches to cosy up with over the holidays if you’re Christmas filmed out. Paramount+ continues its anthology update of the classic Western in 1923, starring Harrison Ford and Helen Mirren – I mean! Giving the people what they want. Starz is meanwhile serving up some soapy Dangerous Liaisons, transporting viewers to the frills and frolics of 18th century Paris. Biopics are also very much in season, with Hulu charting the rise and fall of striptease dance troupe in eighties-set true crime caper Welcome to Chippendales and Showtime chronicling the ups and downs of iconic country music couple George and Tammy.

If you’re looking for action, Movistar’s nineties gang-crime thriller El Inmortal might be more your style, just confirmed for a second run (so no immediate cancellation heartbreak to worry about here). With the sharp suited, star-studded cold war classic A Spy Amongst Friends and Georgian murder mystery The Confessions of Frannie Langton headlining ITVX’s scripted slate as it launches this month, it’s clear the streamers recognise the pull of the period drama. And we for one, are here for it. Happy watching!