The recent addition of lots of Korean TV shows to Netflix has prompted a fresh wave of media coverage worldwide regarding the concept of “Hallyu”, or the “Korean Wave”. This peak has been building for many years, however, and one of its key drivers over the last decade has been Korea’s expertise at creating romantic programming.

In the west in particular, the absence of romance on television is notable. Romantic comedy is a popular genre, but only in cinema. Where there are romantic relationships on TV they are generally plot devices in other genres – sitcoms where later seasons are propped up by the overdue relationship between lead characters, for example. Soap operas, of course, are driven by relationships but even here the more heightened kind of romance that is so popular in film and literature is secondary to more realistic domestic drama. When it comes to programming in which love and romance are the primary driver of the narrative, western TV audiences have been long starved.

It was younger audiences who first discovered that Korean drama offered shows with an unashamedly romantic theme. First online through grey market download websites and then through official – though at the time niche – streaming services such as Viki, these younger and more open-minded viewers were attracted to the cultural specifics of K-drama. Already being lured away from traditional broadcast media by online video, Korean dramas not only offered these early fans pop culture that they could call their own, but didn’t shrink from the sort of tumultuous emotions that teen viewers were not getting from a media landscape still designed with their parents in mind.

A key early crossover hit was 2013’s My Love from the Star (SBS, pictured above) about the romance between Do Min-joon, an alien stranded on Earth for 400 years, and a spoiled actress, Cheon Song-yi. Across 21 episodes and a one-off special, the show tracked their relationship and while the storylines made frequent use of Joon’s alien powers and Song-yi’s fame, the core of the show was summed up in its title: this was a love story.

My Love from the Star was a huge hit in Korea, but also China, where its popularity led to government intervention. This in turn was picked up by the western media, especially in the US, and this drove curious viewers to seek out copies of episodes online.

Before long, websites dedicated to serving this growing overseas fanbase of K-drama were appearing and it was romantic shows that tended to dominate their charts. 2017 hit, Goblin (tvN) added a supernatural twist that helped to hook fans weaned on US shows such as Buffy the Vampire Slayer, as a cursed immortal wrestles with the notion that only his true love can end his purgatorial life. 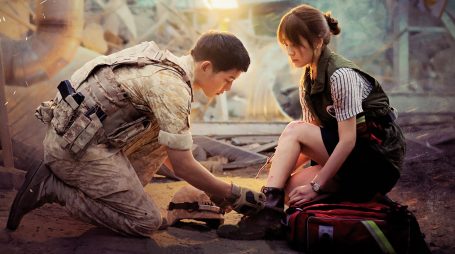 Yet, Korean romance shows also allowed for exploration of themes and stories that were closer to reality. 2016’s Descendants of the Sun (KBS) (pictured right) tracked the troubled affair between a Special Forces soldier and a field doctor, one whose job is to kill, the other who must save lives. Tackling modern politics even more directly was 2019 smash Crash Landing on You (tvN) in which a corporate heiress from South Korea accidentally lands in the North Korea-controlled area of the demilitarised zone between the North and South, where she is rescued and protected by an officer of the Korean People’s Army.

Most, if not all, of these hit Korean romances have now found their way to mainstream audiences worldwide via Netflix and other content-hungry SVODs. Just as Korean pop music has gained a foothold in the traditionally homogenous US culture, so too have these shows – precisely because they provide a swooning, sweeping focus on romance at a time when domestic drama remains fixated on conflict and crime. As an illustration of how accepted this style of Korean drama has become on the global stage, tvN’s It’s Okay To Not Be Okay, about a young man whose older brother is autistic and his relationship with a female author with anti-social personality disorder, was recently nominated for an Emmy for Best TV Movie or Miniseries, and was named one of the best international TV shows of 2020 by the New York Times. No longer limited to a devoted online audience, but critically acclaimed as international mainstream hits, Korea’s unique take on romantic drama is now a desirable format in itself.