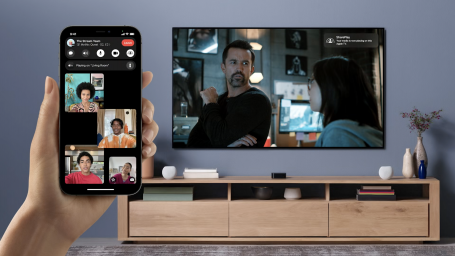 Here at K7 we have been discussing which Covid-inspired viewing habits we believe will stick around post-pandemic, and for our digital team ‘remote co-viewing’ – watching programming together remotely while chatting online in real-time – is a phrase that has popped up again and again. The concept of watch parties may have originated in the social video space, but – spurred on by social distancing – has made a rapid transition into the broader streaming world, with a third party Netflix plugin rising in popularity last year, followed by official features from Amazon Prime Video and Disney+.

This month Apple has got in on the action, not with a watch party feature for Apple TV+ as you might expect, but with one for a whole host of services – the company has signed deals with the likes of Disney, WarnerMedia, MasterClass, TikTok, Twitch and ViacomCBS. Available as a feature within the video chat app FaceTime, SharePlay is set to launch this autumn alongside Apple’s iOS 15.

Shifting gear from co-viewing to co-listening, we can see a parallel trend in the audio space. Clubhouse has become one of the apps to watch during the pandemic, its concept of live audio rooms attracting significant media attention and investment from a number of big names. It does however have a major limitation, and it’s a pretty simple one – availability. Clubhouse remains invite-only – a decision made so that its team is able to manage the growth of its user base – and until recently was only available on iOS devices.

Sensing that Clubhouse was onto something but not exactly running away with the idea, the ‘big fish’ have already set to work on like-minded products of their own: Apple’s aforementioned SharePlay is also designed to support audio, while Spotify has just launched Spotify Greenroom, a standalone app for live audio rooms which also allows users – should they wish – to turn their conversations into podcasts.

Naturally, the people we live with are not into all of the same shows, films, music or podcasts as us, and so we believe there is a clear practicality to remote co-viewing/listening that feeds into our human desire for shared experiences, allowing us to react to media in real-time with friends, family, or even strangers. Clearly, the likes of Apple, Spotify, Amazon and Disney agree, and as companies continue to invest in these features, it will be interesting to see how they fare in a world where the pandemic – hopefully – shouldn’t have a grip over our social lives for much longer, but may have influenced our viewing habits for years to come.