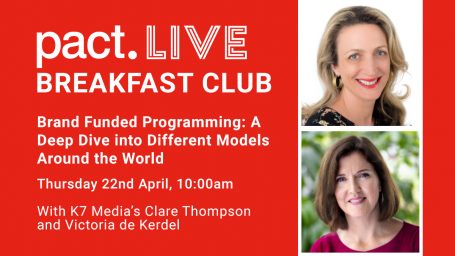 On Thursday 22 April, two of K7 Media’s senior team took part in a special live streamed seminar for PACT about Brand Funded Programming, an area of production that is rapidly growing and also, not coincidentally, the subject of K7 Media’s first major report of 2021.

Hair Power: Me and My Afro aired on Channel 4 in the UK and was the result of a partnership between Pulse Films and Dove & Unilever Entertainment. Based on the book “Don’t Touch My Hair” by Emma Dabiri, this was a “purpose documentary” looking at the cultural, social and political considerations surrounding black hair. For Dove, at the height of the Black Lives Matter protests, it was a chance to align its brand with trending cultural issues. As a TV show, it was a success with 1.13m viewers, more than three times the slot average, and a notable 25.8% share among BAME audiences. Post-broadcast market research revealed the true benefit to the brand partner:  60% of viewers felt more positive about Dove after and 53% were more likely to consider using Dove than those who hadn’t watched the show.

Rumpus Media, another UK indie, was also used as an example. Emily Hudd and Iain Wimbush’s production company has made a name for itself in the BFP space, with projects such as All-Star Driving School (Suzuki), Playing for Time (GAME), Concrete Green (Timberland) and the recently launched The Great Garden Revolution (Ronseal).

The Rumpus story provides numerous tips for those wanting to get into BFP.  There is no single way to source BFP projects, with some coming via broadcasters, others from branding agencies, and more developed in-house then pitched directly to brands. Particularly useful is the revelation that, contrary to the usual pitching method, with brands it can be better to pitch a format as a one-off, at least to begin with. This helps the brand focus on the specifics of the project, and can make it easier to get funding without a long-term commitment.

One of the biggest growth areas for BFP worldwide is generational rather than geographical.

Victoria De Kerdrel took over to add the international perspective. Attendees who thought China would be one of the hardest markets to crack, given its reputation for media restrictions, were surprised to learn that it is actually one of the most advanced territories for brand-funded programmes, with almost all unscripted shows having some commercial or brand involvement. France, on the other hand, has some of the most severe limitations on how much involvement outside interests can have in developing shows.

One of the biggest growth areas for BFP worldwide is generational rather than geographical. Generation Z is a famously digital native demographic and, growing up without the same attachment to traditional broadcast methods as their forebears, they are much more open to brands being involved in programming. They are more likely to stream media to their own devices, to watch esports and other non-linear content, and by 2031 are predicted to overtake Millennials in consumer spending power.

Making the Squad, an esports reality format from Netherlands-based InsightTV, made for a perfect case study for this audience. Produced by Spark Content in conjunction with Pringles, the eight part series followed influencers as they took part in physical challenges and matches in the FIFA videogame, while Pringles supplied a branded room on set. Originally funded from Pringles in Germany, the format has now renewed for a second season with the US brand involved. Expanding brand-funded formats internationally requires care and patience as not only are there varying broadcasting restrictions to work with but brands have different budgets and managers in different regions.

As well as the presentation, the seminar also offered a useful live survey of the UK indie production scene as it relates to brand funding. Of the attendees, the majority were interested in expanding their slate into new areas, or finding new funding pots for existing shows. Only 3% were interested in reaching younger viewers – at least at the start of the stream!

Almost half of those viewing had yet to try working in the BFP space, but of those with experience using this model most had found approaching a broadcaster with a brand already interested was the most successful method of getting a commission. A majority said that Channel 4 was the most helpful in developing such projects.

The session ended with questions from the audience. Can the BFP model be applied to children’s programming? Do you need to have a brand interested before approaching a production company? Does a brand’s control increase with the size of their investment? And where are agency briefs for BFP opportunities to be found? It’s clear that as audiences become more accepting of branded programming, and broadcasters become more comfortable navigating those agreements, interest from production companies is only going to rise.

PACT’s Dawn McCarthy-Simpson concludes: K7’s BFP session provided Pact members with great insights into the world of brands, providing inspirational ideas and advice on how to impact global audiences.  The session was perfectly timed as the industry has to adapt to find new ways to fund their programming.