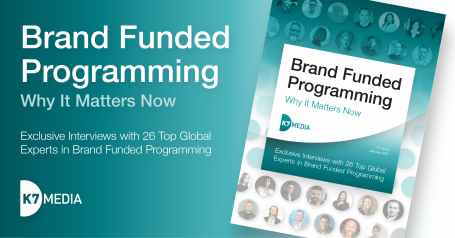 It’s beyond a cliché at this point to note that the world is changing beyond recognition. A procession of political and economic shifts, exacerbated by the pandemic, have left all industries scrambling to find new sustainable business models, and TV is no different.

Many production companies and broadcasters are now turning to brand funded programming (BFP) to make up the shortfall in budgets. It’s a model that was controversial and even banned in some countries until relatively recently, but one that increasingly makes sense for the market in 2021 and beyond.

In January, K7 Media released an exhaustive research report into this funding model with input from executives and companies around the world. The results point the way to how, if properly handled, it could be the saving grace for many businesses.

It’s important to note what BFP isn’t. This is more than a sponsorship deal, which are now fairly commonplace even in the heavily regulated European markets following legislative change ten years ago. BFP involves a brand not just attaching their logo to the bumpers before and after a show, but weaving their product or service into the format from the start.

Paul Tremain, Head of Branded Entertainment at MediaCom, explains the crucial difference: “About 10 years ago brands got really excited about the idea that they could buy their way onto TV”, he says in K7’s report. “But they just ended up as expensive sponsorships that didn’t really drive any ROI – shows with logos slapped on and a bit of product placement, that commissioners then buried. The term got a bit of a bad reputation and we stopped doing it.”

It’s useful to look to the countries where brand involvement in production is more well established. Urvashi Khanna, Head of Content at Lenskart, India, explained how over-reliance on traditional sponsorship forced a change of perspective in her market. “The brands are realising that the sponsorship models are very cluttered. There are usually five or six brands on the same show. If they need to express their brand creatively and exclusively, they need to go solo.”

This is where the BFP model benefits both sides of the equation. Broadcaster budgets are stretched thin trying to populate multiple platforms, and they can no longer fund everything themselves. For the brands, traditional TV ad slots are no longer as effective as audiences tune out, skip past or simply gravitate to ad-free subscription services. Building brands into a show addresses both problems.

Even in markets that have traditionally resisted branded programming, the tide seems to be turning. Simon Wells, Controller of Funded Content at Channel 4 certainly thinks so. “When I started at Channel 4 six years ago the commissioners certainly saw [BFP] as a bit of a labour… generally for daytime or late-night slots where it would fill the schedule without damaging share,” he says. “Now we’re disappointed if we don’t manage to get them into peak. They rate well, and the more of them there are, the more clients see good examples and say ‘that’s what I want!”