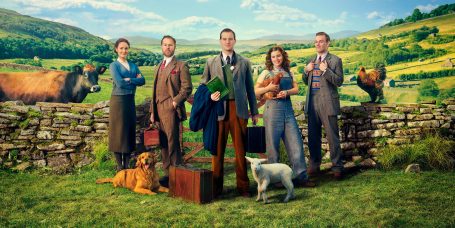 With Covid-19 busy enjoying its sixth month on British shores, autumn started with the UK’s Channel 5 achieving its best ratings since February 2016 with All Creatures Great and Small. Indeed, the only scripted programme to ever out-rate the series on the now ViacomCBS-owned network is the first episode of 2016’s The X-Files revival.

All Creatures… isn’t Channel 5’s latest flashy US import though. No, it’s an easy-going re-boot of the 1970s series of the same name, once again following the lighthearted adventures of countryside veterinarian James Herriot. We follow as the newly-qualified Herriot arrives in the Yorkshire village of Darrowby, meeting its lovably-eccentric inhabitants and solving their animal-related quandaries. Plot lines range from James helping Mrs. Pumphrey’s dog Tricki lose some weight, to facing pressure by entrants of the cutest pet competition at the Village Fair while acting as judge.

With international trips largely ruled out, embracing the tranquility of our own national beauty spots, whether in person or through the eyes of a lovable countryside vet, was the next best option.

In practical terms, the show’s rural setting allowed many to escape – from the virus itself and from the urban sprawls we now share. This came as rural areas around the world reported a dramatic increase in visitors looking to get out of the city. With international trips largely ruled out, embracing the tranquility of our own national beauty spots, whether in person or through the eyes of a lovable countryside vet, was the next best option.

Besides being a re-boot, All Creatures… is not the first British drama to find huge success with a rural setting and gentle plot lines. Series like Call the Midwife and The Durrells touch upon many of the same themes. Those shows also found huge followings internationally and All Creatures Great and Small has sold well across the world.  Deals struck by distributor All3Media dispatched Herriot and co all across Western Europe with a slew of local deals, to CEE on pan-regional channel Epic Drama, into South American on Acorn TV, and further afield to air or stream in South East Asia, Australasia and Africa.

What other scripted shows with comfortingly-escapist appeal have we seen recently?

After debuting on Amazon last year, 2020 saw the linear debut of rural Spanish comedy series El pueblo on Telecinco. The series opened with an impressive 2.6 million viewers – a 19.4% share. The series follows a group of city-dwellers as they decide to set up a community in an almost entirely abandoned rural village. Two additional series are on the way.

While the setting of The Mallorca Files may not be ‘rural’, it is one that millions of Europeans liked to escape to each year pre-pandemic. Distributed by BBC Studios, the breezy, Spanish resort-set procedural racked up sales all around the continent – to France Televisions, Czech Republic (Prima) Germany (ZDFneo), Finland (YLE), Denmark (TV2), Norway (TV2) and Sweden (SVT). Sunny escapism plus light case-of-the-week plotting makes for a superb comfort food combination!

Returning to All Creatures Great a Small, in a move it now probably regrets, the BBC actually passed on the show, citing a perceived lack of appeal for younger audiences. While the show did perform better with older viewers, the debut episode secured a huge 18.24% of viewers aged 16-24. With communal viewing still peaking, the family friendly nature of All Creatures… is one of its great strengths.  We’d love to see this pushed even further, with a youth-skewing answer to All Creatures… A rural, more gentle reimagining of Euphoria or Riverdale? Yes please!

As the craziness of the world’s news headlines refuses to slow, we don’t see this this type of wholesome, comfort food TV going away any time soon. While TV can of course thrill, shock and exhilarate, it can also calm, comfort and reassure us.  These shows may not be as showy or attention-stealing, but they’re just as useful for helping us escape anxieties over work, family and everything else that goes into that tricky ‘real life’ box. Now if you don’t mind, we’re getting on our comfiest pyjamas, lighting some candles and waiting for series two of All Creatures Great and Small!