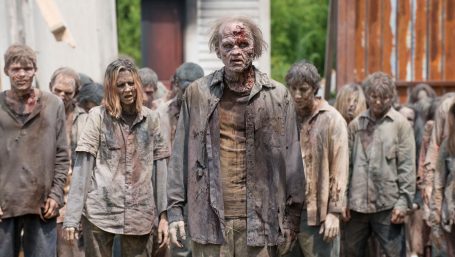 Ever since George Romero’s Night of the Living Dead film franchise cemented the ‘walking dead’ as part of pop culture in the late 60s and 70s, zombies have become a staple of the horror genre in the West. In cinematic feature films, comics, gaming and of course television, the undead have established themselves as an instantly-recognisable horror (and more recently comedic) story device.

It’s impossible to discuss zombie television without a nod towards AMC’s long-running hit The Walking Dead (TWD). Yet despite the show preparing to round off and Game of Thrones iconic White Walkers having bid adieu in 2019, the undead show no signs of lumbering off our screens anytime soon. Not only does TWD have various spin-offs to pick up the baton, the genre looks set to enter a new era on the small screen, buoyed by streamers entering the zombie fray.

As with the horror genre in general, streamers benefit from the absence of strict late-night post-watershed slots, with the budgets to cater to niche international audience tastes. Kicking off with Netflix, Black Summer, a prequel of sorts to Syfy’s Z Nation, is returning for a second run, while the CG-animation series Resident Evil: Infinite Darkness – based on the hit video game franchise – drops on the platform next year.

Las Vegas-set zombie action heist Army of the Dead is also set to land at the platform sometime next year, helmed by Hollywood heavyweight Zack Snyder – no stranger to the zombie world having made his film directorial debut with the Dawn of the Dead remake way back in 2004. Netflix is certainly taking a bet on the project having already greenlit both an anime spin-off and international prequel feature (produced in Germany) to expand the new franchise. A host of big names are lined up to lend their voices to the anime series including Joe Manganiello, Vanessa Hudgens and Ross Butler.

Netflix isn’t the only streamer offering new takes on the zombie world with Amazon Prime’s premium genre blending drama Narcos vs Zombies due to premiere later this year. The Mexican action/sci-fi/horror hybrid will see cartel gangsters and the American military face off against the undead on the US border.  In this case, rather than the result of a pandemic (which would have been very timely) the zombies arise from a failed US military experiment intended to turn wounded soldiers into killing machines. Not to be outdone by the streamers, Syfy too is readying 10 part series Day of the Dead – an ode to Romero’s classic. In the face of adversity, six strangers come together to survive an invasion of the undead – it’s no huge stretch to relate such themes to the events we’re currently living through.

So with a number of new, but very different, projects in the pipeline over the coming months, might we be looking at a renaissance of the zombie hype that we saw in TWD’s heyday?

There's something to be said that, in uncertain times, zombie apocalypses embody a general fear of the breakdown of law and order and societal upheaval.

It still begs the question as to why zombies are so prevalent on our screens. There’s something to be said that, in uncertain times, zombie apocalypses embody a general fear of the breakdown of law and order and societal upheaval. Whether the result of a pandemic or military experiment gone wrong, an onslaught of zombie hordes presents a dose of fantasy escapism tinged with possibility.  With the world coming to a standstill in 2020, notions of the coming apocalypse generally seem less far-fetched, though for now at the hand of an invisible disease, rather than hordes of brain eating humans (something to be thankful for at least…).

South Korea in particular, is seeing something of a zombie boom right now. Feature films like Train to Busan and the more recent #Alive show the undead genre is alive and kicking (pardon the pun). The latter premiered worldwide on Netflix in September where it went on to top the daily chart in 35 countries including the US, becoming the first Korean film to top the platform’s global chart. #Alive’s premise – revolving around a gamer trapped alone in his apartment during a zombie apocalypse – perhaps resonates with those similarly stuck at home for fear of a deadly outside world.

It’s apt to note that Netflix’s first Korean original Kingdom revolves around a mysterious undead plague threatening the stability of the kingdom. Reimagining the genre – looking back in time rather than forward to an apocalyptic future – Kingdom offers a fresh take on the zombie genre, reinvigorating the now common horror trope. The genre is clearly doing something right, with Netflix further ordering Korean webtoon-inspired drama All of Us Are Dead this past April, following a group of high schoolers trapped in school whilst a zombie virus rages outside.

One region, however, is bucking the zombie trend. Such shows mentioned above haven’t resonated well in the MENA region for various reasons. Religious and cultural barriers prevent government-owned broadcasters from accepting any Western series with scenes that show the dead coming back to life. MBC and privately-owned companies are beginning to push the limits however, and digital platforms have no issues acquiring or licensing shows in the genre. MBC began airing The Walking Dead following its broadcast of The Vampire Diaries a number of years ago.

While the Middle East is less inclined towards the armies of the dead they aren’t completely absent, not forgetting Israel’s 2013 film Cannon Fodder following a team of soldiers who sneak into Lebanon to eliminate a zombie threat. Looking to the future, as the region opens up with the influence of global players, boundaries are being pushed and new opportunities for an influx of such shows may arise, but to be sure, any fantasy shows, whether they be Zombie, Horror, Fantasy, Apocalyptic or Sci-Fi, need to flow smoothly with the existent culture and mythology.

For now, limited budgets in less-established international televisual regions hamper locally-produced fare, resulting in poor quality which are often lesser imitations of Western offerings. As with most of the more ‘showy’ genres of TV – sci-fi, fantasy – many of the biggest worldwide hits in horror and its zombie subgenre continue to come from the US rather than being local hits. Of course, convincingly bringing zombies ‘to life’ necessitates pricey make-up or VFX, as well as hordes of convincing extras – meaning the healthy budgets of US TV are well-placed here.

And yet, the pandemic is causing issues on that front. In the current climate, hundreds of zombie extras and ‘people with faces smashed together with mouths all over the places’ isn’t super corona friendly – who knew!  Addressing the issue, TWD’s Angela Kang assured fans that while there won’t be the usual big season opener, the team have “had to think outside the box and how to make things still feel really scary, while being a little more cognizant of how many people are in a scene.” Like we’ve seen across the industry, the current hurdles require innovative ideas that might just prove to reinvigorate a now somewhat clichéd franchise.

Moving away from horror, there’s no shortage of alternative zombie programming with the likes of the CW’s iZombie, KBS Media’s Zombie Detective and even children’s shows like Norwegian 2019 Rose d’Or winner ZombieLars, reinventing the age old ‘monster’ as a modern story device. Netflix has also found success with original toon The Last Kids on Earth – now into its third season – which won a Daytime Emmy Award 2020, spawned toy merchandise and has an upcoming affiliated video game.

Even the Oscar-winning dashing Mr Darcy himself will be adding a fresh twist to the well-worn trope with Colin Firth attached to star in big screen zombie flick New York Will Eat You Alive (w/t) – another comic adaptation this time from STXfilms and Tencent Pictures. Even in the unscripted space, Satisfaction’s highly anticipated zombie adventure game show District Z is set to debut on TF1 in France this December. Zombie fans have a lot to look forward to that’s for sure!

The move of zombies into comedy, romance and various mash-ups is indicative of the flexible potential of the subgenre. With film favourites ranging from World War Z to Warm Bodies and Sean of the Dead, these beloved reanimated corpses have become a universally recognised but not necessarily evil creature, fit for both scares and laughs. As the world struggles in the face of a real pandemic, we can look forward to plenty more apocalyptic zombie-filled escapism on the horizon.