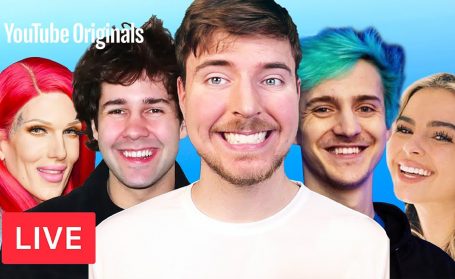 During lockdown, we noticed deviations from the norm in the online video creator world. Those who had previously relied on the ‘external luxuries’ of simply being able to go outside to film – vloggers and social media collective groups in particular – felt pressure to change what they would normally upload in order to abide by new regulations.

Like so many of us, some creators turned to video calls to maintain their collaborative work.  But there was concern that this device would become stale very quickly.

Those who were already at the top of the pyramid saw subscriber numbers and view counts grow even more quickly than usual. Audiences had more time to get lost scrolling through TikTok, bingeing YouTube or streaming on Twitch. TikToker Charli D’Amelio has grown hugely and was crowned April’s number one on TikTok after reaching 50m followers. D’Amelio shows no sign of slowing down and has since picked up a further 11m fans, taking her total to 61m – just one year after joining the platform.

Competition is still fierce and breaking into the scene is tougher than ever. The spare time which saw view counts rocket has introduced more competition. It seems many young people in quarantine want to become ‘TikTok famous’ and the video-oriented social network is the perfect tool for this. Its snappy short-form style and easy to use creative tools mean people from all over the world can join in on the latest trend.

It's unfortunate it has taken this crisis to foster once again a feeling of 'shared experience' amongst creators and viewers.

On YouTube it feels there is once again a sense of community. This had felt lost in recent times apart from a handful of hyped events such as YouTuber boxing or the backlash against YouTube Rewind. It’s unfortunate it has taken this crisis to foster once again a feeling of ‘shared experience’ amongst creators and viewers. Hearteningly, many creators have been getting behind charitable organisations to raise money to fight COVID-19.

YouTube itself has also got in on the act, rolling out a slate of ‘stay at home’ specials. These have been fronted by household creators such as MrBeast, Lele Pons, Luisito Comunica, Juanpa Zurita and Matt Steffanina. First up was MrBeast’s The Creator Games, a live-streamed long distance tournament of games such as ‘rock, paper, scissors’ – which began on 25 April and broke the record for most-viewed live YouTube Original, being watched by a peak of 662k concurrent viewers and garnering more than 29m views post stream.

The platform has also seen its advertising revenues rise by a third year-on-year during this period, despite an initial dip. Google-owner Alphabet stated that YouTube ad revenue for the first quarter was US$4.038bn, up 33% from the same three months in 2019. Alphabet’s total revenues, including Google search, came in at $41.2bn, up from $36.3bn for the prior year period.

The truth is everyone is in limbo right now, and no one can say with certainty what the future may hold. But it appears that the current creator climate is stabilising with many who originally opted to take a hiatus beginning to upload again. Keeping yourself entertained has been the key to staying sane during these testing times, something that YouTube, Twitch and TikTok can offer with a click.