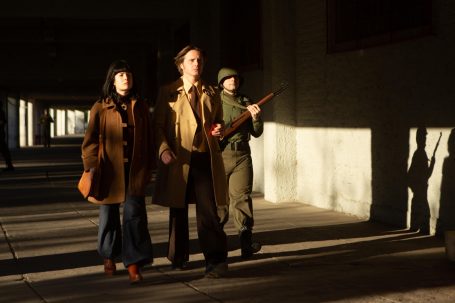 The concept of international coproduction in the scripted world is at this point nothing new or ground-breaking. For many years now, we have seen teams from different nations teaming up to jointly produce scripted projects. However, what is changing is they way in which these partnerships form, and the language-lines these are drawn along. Client Manager Ella Turner examines the current state of the scripted coproduction scene, and the role language plays in the formation of these partnerships.

As mentioned, coproduction in the scripted space has been around for some time now, with nations teaming to produce programming to higher production values, and able to air in both partner territories. Traditionally, when thinking of international coproduction, it made sense to team with a partner who speaks the same language. Relationships of this nature make perfect sense for both parties; shared language helps the process run smoothly – right through from script development and direction on set, to roll-out for local audiences who in the past have been wary of subtitled programming, and those which tell stories which feel too ‘foreign’. For this reason there are now fairly well-established relationships between countries with a shared language, such as the UK and US, for example.

However, nowadays, coproduction is playing a stronger role than ever. Coproduction is a key solution in allowing local broadcasters to club together and fight back against the ever-present SVOD giants. By pooling resources – and importantly funds – local broadcasters are better-equipped to create attention-grabbing shows which stand out in the current sea of choice, as the SVODs flood the market with increasingly expensive-feeling dramas.

Add to the proliferation of coproduction the fact that audiences these days are becoming more accepting – albeit slowly – of subtitled programming which tells foreign stories about foreign people and we are seeing coproduction partnerships forming which are more diverse than ever before. A landmark, and much-spoken-about, example of this was HBO’s My Brilliant Friend, a coproduction between the US cable net and Italian pubcaster Rai. The drama told a hyper-local tale set in 1950s Naples, so local in fact that the dialogue was spoken in a thick regional accent that many Italians – let alone English-speaking Americans – would have found impenetrable! The drama was HBO’s first non-English language drama, but not its last; earlier this summer it aired Our Boys, a coproduction with Keshet, which featured dialogue in Hebrew and Arabic.

With subtitled programming gradually shrugging off its ‘niche’ label, and audiences becoming more accepting of it, nations no longer need to be so conservative when looking for a foreign team to partner with.

With subtitled programming gradually shrugging off its ‘niche’ label, and audiences becoming more accepting of it, nations no longer need to be so conservative when looking for a foreign team to partner with. This summer we attended Conecta Fiction, an annual event held in Spain, dedicated to the promotion and forging of copro relationships. A series there which received much visibility was Eccho Rights’ Invisible Heroes, a copro between Finland and Chile – two languages which couldn’t be more different! The series has dialogue in both languages (amongst others) and a cast and production team representing both nationalities. When questioned on the challenges posed by an unconventional language-pairing, Invisible Heroes’ Finnish director Mika Kurvinen instead spoke of the opportunities this can provide. With two teams looking at a story from completely separate cultural backgrounds, he saw the resulting product as a more multi-layered series, which explored numerous viewpoints. At the event as a whole, there was an undeniable openness from attendees to look towards less traditional territories for coproduction partnerships, be it Scandinavia, Turkey or even South Korea.

One of the most recent developments we have seen in the ‘diverse language pairings’ space, was the announcement at MIPCOM that Spanish production company Plano a Plano has forged an agreement with Turkey’s TIMS&B which will see the pair coproduce dramas, which will be internationally distributed by Inter Medya. Speaking of the partnership, TIMS&B’s CEO described it as the first time a Turkish and a Spanish company had joined forces to create for the international marketplace. Productions to come from the deal are to be “Spanish series with a Turkish DNA”. As established, with players increasingly willing to look towards less traditional territories for partners, it in fact comes as little surprise to see a Spanish prodco looking to team with a Turkish partner. Turkish scripts have more than proved their popularity with an international audience, and drama from the country has been gathering a solid following in Spain more recently.

Meanwhile, other dramas on the horizon, also born of diverse team-ups include: The Window, a soccer-based drama from Germany’s ZDF Enterprises and Japan’s Fuji TV and a rare example of a European/Asian partnership; and Chilean-German joint project Dignity, filmed in both languages and the first original production for ProSiebenSat1/Discovery’s streamer Joyn. It should be seen as a sign of the times that the platform’s first original is not a 100% native German series, but is to be half-spoken in Spanish, produced by Germany’s Storyhouse Productions along with Chile’s Invercine & Wood.

It is evident that the way coproduction relationships are formed is changing. We are entering into a phase where audiences are ever-more accepting of ‘foreign’ stories, told in language other than their own. In this climate, programme-makers should take solace in the fact that they no longer need to automatically look towards the ‘obvious’ countries when partnering on a show. In fact, despite some of the obstacles, both geographical and otherwise, working with a diverse partner can bring a totally new perspective to a project, and may well result in an end product which is much more multi-layered that it could be if we only ever played it safe.

This post originally appeared in Spanish in Prensario’s print edition.