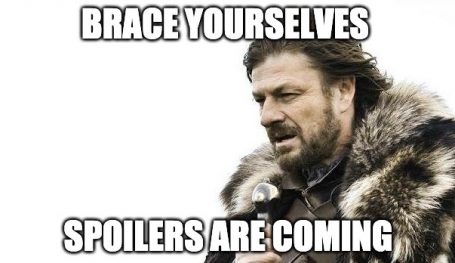 To binge or not to binge? That is the question.

At least for those of us enthralled by today’s offering of premium drama, from global phenomena like HBO’s just-wrapped Game of Thrones, to more localised hits like BBC’s Line of Duty. Whilst there’s an undeniable convenience to having an entire boxset at our fingertips, those that bide their time for that luxury also risk encountering one of pop culture’s most unwelcome by-products – the spoiler.

Of course, spoilers are far from exclusive to drama, or indeed TV in a more general sense, but the way we consume scripted series in this digital age has completely changed our relationship with unwanted information. Social media is a spoiler-filled minefield for the latest talked-about-TV, and is one driving force encouraging people to stay ‘in-the-loop’, but high-quality drama has potential for significant shelf life beyond its initial debut, which raises questions surrounding the best way to both provide and consume this programming.

Social media is a spoiler-filled minefield for the latest talked-about-TV, and is one driving force encouraging people to stay ‘in-the-loop’

It wasn’t that long ago that appointment viewing served up by traditional broadcasters was just that – an appointment, and if you missed a popular show everyone was talking about and didn’t have the chance to catch a repeat or recording then tough luck; chances are the following morning you’d hear about the ‘big twist’ from a friend, colleague or – that most tragic of circumstances to this day – from some loudmouth on public transport. This was before the game-changers of social media and video on demand (VOD) became cemented in pop culture. Although it’s been well over a decade since the likes of Facebook and Twitter took off, or since streamers began hosting boxsets, both consumers and the TV industry itself are still adjusting to their impact.

Encouraged by tech disrupters from Spotify to Amazon, choice has become central to much of modern consumerism, almost overwhelmingly so, as anyone that’s spent time browsing through a VOD streamer’s vast library may attest. We expect to have what we want, when we want it. When it comes to video however, that ‘want’ isn’t necessarily ‘on demand’, thanks to the sense of communal enjoyment appointment viewing brings, but offering audiences a choice between the two – beyond catch-up – is certainly an option many traditional broadcasters have begun to play with.

If you regularly dip into K7’s scripted reports you’ll likely have noticed plenty of experimentation with drama scheduling over recent years. For some broadcasters, post-VOD evolution has become a focus as they look to appeal to young viewers typically more inclined to digital video than linear viewing, especially in the wake of the Netflix’s aggressive global expansion which is increasingly catering to local tastes and – consequently – putting national players in competition with the platform.

Examples of VOD boxset and linear crossover are no longer a rarity, nor are they exclusive to premium drama; one soap opera from Australia, ABC’s The Heights, recently caught our eye when it made its full 30-episode season available via the broadcaster’s iview platform immediately after its linear debut and before it returned for its weekly run. Such offerings are a neat way to net a larger audience and appeal to those eager to get ahead of the game to avoid spoilers, but a 30-episode binge is certainly a big ask for the less-rooted couch potatoes amongst us.

Intimidating time commitment can indeed be an issue for those presented only with a multiple hour binge as opposed to a weekly dose of drama, which is one reason appointment viewing remains a convenient option for many consumers. More crucial however, is its unparalleled ability to appeal to our social nature (including our fear-of-missing-out) by bringing people together to enjoy TV in the same window, something that VOD – by its very nature – can never achieve with the same time efficiency. We need only look to the recent ratings success of the aforementioned Game of Thrones and Line of Duty – shows that wouldn’t thrill as effectively should their secrets be unveiled prematurely – for proof of appointment viewing’s good health.

Perhaps today’s more prominent risk of spoilers is in-part to thank for ensuring that premium drama continues to thrive on linear in spite of streaming services, creating an unprecedented sense of urgency for the twistiest, turniest of shows that discourages us from sidelining them to binge at a later date.