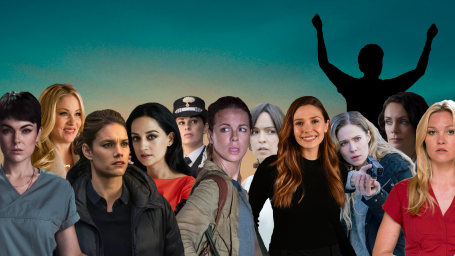 Far from wallowing in misery, widows are taking their destinies into their own hands and carving out a space in the world of television.

A new crop of heroines is quietly taking the reins in television and – whether as cops, doctors, or superheroes – has become ubiquitous on the small screen in recent years. Widows are seeing representation in all genres and languages, including the excellent comedy drama Dead to Me (3 May on Netflix) in which a single mother makes a new friend in a support group for bereaved people, and Coroner (13 May on 13ème RUE), a Canadian police drama revolving around a coroner who has just lost her husband.

We are witnessing a phenomenon linked to an increasing number of women scriptwriters, producers and directors in an industry swept up by the #MeToo storm.

These two new productions are just the latest in a wave of dramas that now numbers around 15 titles. Some portray spouses in distress, such as the dramatic Sorry for Your Loss (Facebook Watch), British thriller The Widow (Amazon Prime Video) or the soap opera Riviera (Altice Studio). Others see their heroines taking up arms and taking charge of their destinies in the ranks of the police: Italy’s Il Capitano Maria, New Zealand’s The Gulf and the USA’s FBI (coming soon to M6). The Israeli series Queens looks at the wives of assassinated mafiosi who take over their late husbands’ affairs.

A vocabulary free from cliché

We are witnessing a phenomenon linked to an increasing number of women scriptwriters, producers and directors in an industry swept up by the #MeToo storm. “They are inspired by their experience and impressions, and their projects reflect their line of questioning and their aspirations,” says Keri Lewis Brown, CEO and Founder of media consultancy K7 Media.

Heading production of Dead to Me, Sorry for Your Loss and Coroner are Liz Feldman, Kit Steinkellner and Morwy Brebner respectively. The creator of Prime Suspect, which first aired in 1991 with Helen Mirren in the starring role and has since gained cult status, Lynda La Plante led the way as early as 1983. Widows (adapted as a film by director Steve McQueen last year) tells the story of a group of widows who decide to carry out a robbery planned by their deceased husbands. “This kind of role allows you to avoid certain clichés about women having a hard life, such as the eternal choice between a personal life and a career,” Lewis Brown says.

If male widowhood is rarely more than just a character trait, the death of a husband is becoming a real trigger for plot and a driving force of narrative action. Sorrow quickly turns to resentment, or even anger, when the spouse discovers the rather unpleasant truth about her departed husband: a secret life of affairs, inherited debts, and in many cases both at once… This was seen in 2006 with Brothers and Sisters, and – in a more ludicrous fashion – two years later with the excellent French comedy Hard (Canal+), in which a well-to-do woman of good morals discovers that her late husband was in fact a producer of pornographic films. Created by the person behind La Casa de papel (Money Heist), the Spanish series The Pier (coming soon to TF1) will introduce viewers to a woman who comes face-to-face with her deceased husband’s lover, and Apple TV+ will adapt Stephen King’s novel Lisey’s Story, in which Julianne Moore plays a novelist’s widow.

As for male characters mourning their spouses, they remain few and far between. Only the pioneering The Courtship of Eddie’s Father (with Bill Bixby, later star of The Incredible Hulk) dared to broach this topic in a realistic manner as far back as the late 1960s. Years later, Richard Kimble had to fight for his innocence in the murder of his wife in The Fugitive. More recently, the main character in The Mentalist sought to track down Red John, the man who killed his family. These exceptions aside, it is their female counterparts who appear to be resonating with audiences: Queens, Coroner, Riviera and FBI have all been recommissioned for a second series.

This article first appeared in ‘Le Journal du Dimanche’ on 5 May 2019 – to read the original, please click here.