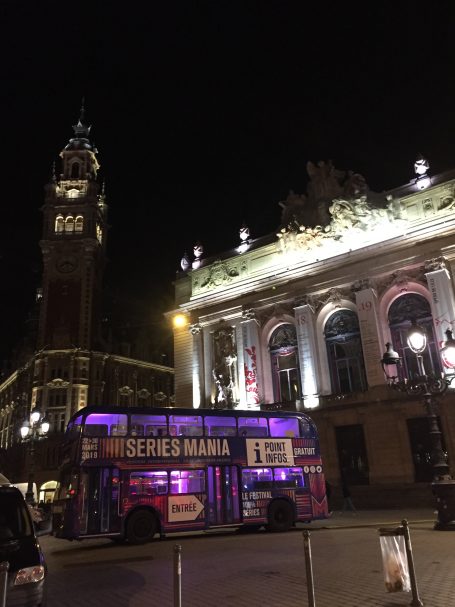 It’s to be expected by now, but looking at the slate of shows screened last week at Lille’s Series Mania scripted TV festival, one can’t help to be struck by the diversity of what was on offer. In the Official Competition category, the offering ranged from Iraq-set post war thriller Baghdad Central, to domestic comedy drama caper Mytho, to Uma Thurman-starring mystery drama Chambers, and gothic Australian epic Lambs of God.

As we’ve reiterated here at K7, there’s a danger in too avidly pursuing that illusive ‘hot trend’. This is especially true in drama, where skilled storytellers’ visions tend to be unique – rather than bunching together into easily-identifiable silos. Filling voids and looking at gaps in the market and stories which haven’t been told yet is probably more sensible than chasing trends, especially when taking into consideration the sheer abundance of quality drama out there in 2019. Among the most well-received screenings were for bold, creator-driven fare like Shane Meadow’s exploration of childhood trauma The Virtues, and Lucy Kirkwood’s scathing alternate history thriller Chimerica .

The ‘trends’ we did see in Lille mostly amounted to responses to the modern day’s big zeitgeist issues – refugees (Eden, Asylum City), climate change (La Dernière Vague, 8 Days), and dystopias offering parallels to the current political and technological upheaval of the world (Osmosis, Chambers). Crime still featured heavily – but often with an inventive twist as noir continues to evolve.

If it wasn’t obvious by the Festival staff donning the show’s now iconic red jumpsuits and masks, Alex Peña’s Money Heist has caused a huge splash in drama, and as the most watched non-English-language series on Netflix, helped define Spain as one of the hottest sources of international scripted TV. There was, in the appropriately named ‘Spain in Bloom’ session, a real sense of exuberance and even bigger things to come. What was shown off ranged from Peña’s addictive new infidelity drama The Pier for Antena 3 and Netflix’s historical epic The Cathedral of the Sea. Meanwhile in the International panorama slate of the festival – Canary Island set ‘southern isle noir’ Hierro also impressed. Pointing to a wealth of strong local players, sizeable private investment, and the number of Spanish speakers worldwide clocking in at close to 500m, the panel’s Jorge Iglesias (Weekend Studios) predicted the Iberian nation will ultimately eclipse France and then Germany as a European source for drama.

Netflix continued to offer an olive branch to the TV world, attempting to shake off the disruptor tag: “[disruptor] gets hung on my head a lot, but I feel like it’s more ‘burning things down and seeing what happens’ and that’s not really what we are up to. I feel like what we are trying to do is preserve and improve on the formats, and improve and grow storytelling”, said Ted Sarandos, chief content officer, in what was predictably one of the busier sessions.

In big local news for France, pubcaster TF1 and Netflix unveiled their landmark first co-production, costume drama Bazar de la Charité. As worries about how local broadcasters can compete with the streamers continue, this seemed a positive move in terms of a fairer deal for co-financiers.

Later the same day Amazon Studios’ Georgia Brown, head of European Prime Original Series, said she didn’t see a problem with being a disruptor – pointing to the positive ‘disruption’ of movements like #MeToo. She feels doing away with the old ways of doing things shouldn’t be so taboo. Brown also said her team weren’t prioritising cross-border co-production – instead focusing on ‘protecting’ local flavour and ‘promoting’ local storytelling.

Elsewhere, as part of their purported joint offensive against Netflix, Amazon and co, ‘The Alliance’ of France Televisions, Germany’s ZDF and Italy’s Rai continued to embrace collaboration, unveiling a fourth joint title – a new adaptation of Around the World in 80 Days. There was plenty of discussion of how co-pros could retain authenticity by prioritising stories which are intrinsically international – FIFA scandal drama El Presidente, and the aforementioned refugee drama Eden for example. Meanwhile, it was announced that lauded Indian director Shekhar Kapur would helm an opium trade period drama based on the ‘Ibis trilogy’ books, a co-production between Endemol Shine Group’s Artists Studio, Endemol Shine India and DoveTale Media.

One of the most entertaining aspects of Series Mania is always the pitching sessions. An exciting, if hugely nerve-racking process for those pitching – shows given the elevator treatment at the festival before making it to screen in the past include ITV/Sundance’s Liar, SVT’s Jordskott and S4C/BBC Wales’ Keeping Faith.

This time factually-inspired lesbian drama Purple walked away with €50,000 towards development. Beating off 15 other series, the show certainly adhered to the streak of totally unique, highly-authored dramas which ran through the festival. Inspired by real life women-only nightclub Le Pulp, the bold and energetic 1990s Paris-set pitch was a popular choice.