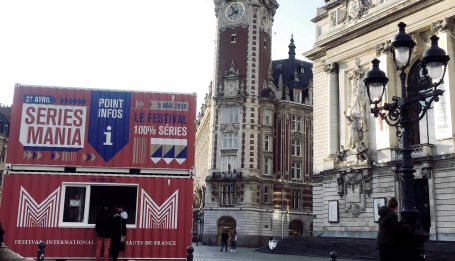 At the start of May, K7’s Richard O’Meara and Rosie Halsall traveled to Lille, France to attend Séries Mania – a celebration of all things scripted TV, complete with a packed industry schedule.

Here are the five main takeaways from the event that we think you need to know about:

The tone of alleged disruptor Reed Hastings, Netflix CEO and the week’s most anticipated speaker, was one of reconciliation. Admitting ‘mistakes’ in the company’s recent hostile dealings with the Cannes Film Festival, Hastings also attempted to downplay the threat to linear broadcasting. Placing the fall in cable and satellite subs at just 3%, he went on to say: “cord-cutting is very exciting to talk about, but on a practical basis, people are seeing Netflix as one pay-TV network and they watch from many.” French broadcaster OCS’s carriage of Netflix alongside their own on demand platform was an example of how the SVOD can supplement, rather than eclipse, other services.

Meanwhile, weeks after the company pledged more than $1bn to European production, originals in Korea and Japan and ambitions of growth in Africa and the Middle East were also discussed. Hearteningly for traditional TV, a large share of the most impressive content on show – Atresmedia’s slick Money Heist, Eén’s chilling Tabula Rasa, ABC Australia’s perplexing Mystery Road etc., originated from FTA broadcasters rather than streamers.

Amidst typically healthy debate about the state of international co-production, figures revealed at the festival showed that in 2015-16 only 8% of European dramas of between 3 and 13 episodes were cross-border productions. In terms of how these co-pros are conducted, Rai’s Eleonora Andreatta touted the advantages of teaming a domestic producer with a distributor, rather than another creative partner, as a way to preserve the vision of a project. This is the case with Rai Fiction and worldwide partner HBO’s much anticipated My Brilliant Friend, which by all accounts is a meticulously authored account of life in mid 20th century Naples.

Likewise, whilst Channel 4’s Simon Maxwell said it would continue to craft series alongside other broadcasters, teaming with the likes of an All3media International, as is the case with upcoming series Chimerica and Jerusalem, was also a strong solution to find necessary capital (and creative freedom) in the current climate.

Whether it was an uncomfortable look at contemporary geopolitics like TV2 Denmark’s Greyzone, or a brutally-honest family comedy like NPO’s Lice Mother, authenticity and contemporary relevance were certainly en vogue in Lille. Speaking to Walter Presents mastermind Walter Iuzzolino, the creator of Greyzone – which centres on the complex relationship between a drone manufacturer and a supposed terrorist, said “I don’t like to write about superheroes or super villains – I think we’re past that.” There were tonnes of other examples; FremantleMedia’s Warrior looks at the social reintegration of mentally-scarred soldiers, while Eccho Rights’ Conspiracy of Silence mirrors the recent news of impropriety in Sweden’s arms dealing.

Closer to home in terms of the average person’s life, dramas which explore domestic problems in the midst of a ‘bigger’ story were also heavily featured. In such uncertain times, it may be direct confrontation rather than carefree escapism that audiences crave.

Unsurprisingly, international crime and cross-border corruption were also recurring themes in the Series Mania Co-Pro Pitching Sessions. From Germany, Immunity centres on the difficult relationships between the children of global diplomats, Dutch thriller Atrocity is set in the unscrupulous world of the International Criminal Court, and Italian/Spanish historical drama CCLXX follows a heroic doctor in Nazi occupied Rome. Such intrinsically worldly shows feel like safe bets for the globalised TV industry.
Refreshingly, laughs won the day, with the session prize going to wacky Swedish/American dramedy caper We Got This. Still, even that show is tinged with political intrigue and international glamour – as it follows an impulsive American living in Sweden, who haphazardly unravels an assassination plot.

In bringing eyes (especially young ones) back to traditional TV, a number of ideas were suggested over the week. The Endemol Shine Group’s Sophie Turner Laing called for more young creators to not just share their authentic stories, but to oversee their safe transit to screen in a manner reminiscent of the American showrunner. Touting the appeal of shortform to youth audiences, she also bemoaned the unwieldiness of the customary 60’ drama slot.
This was echoed by DR’s Christian Rank, who said that while TV drama “felt new with The West Wing and The Wire”, the 10 x 60’ serial could now be passé. Experimenting with shorter running times, rethinking the daily drama series, and ensuring TV provided true relevancy and “a emotional understanding of society” were among his suggestions to turn the tide.