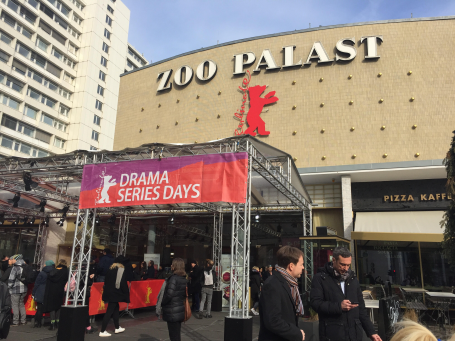 Here are the five main takeaways from the event that you need to know about:

TV’s strongest ever showing at the Festival

The 68th edition of the traditionally feature-focused event included its most expansive ever line-up of TV oriented panels, screenings and other sessions. And with more professional attendees from the TV industry than ever before, there was talk that the Berlinale could become a major market – offering buyers and co-producers content earlier in the year, and leaving more breathing room before the L.A. Screenings in comparison to MIPTV.

At times the bigger footfall threatened to overwhelm the Zoo Palast cinema where the Drama Series Days programme was hosted. With some queuing for but unable to access a number of the more popular sessions, a change of venue would be wise next year.

Monday’s ‘How To Make Series Travel’ served up plenty of optimism for producers of non-English language content. The overriding sentiment was that as long as a show is high quality, language is of waning concern to many viewers. The global success of locally-produced series Babylon Berlin and Deutschland 83 were just a couple of examples discussed.

StudioCanal’s US head Rola Bauer made special mention of HBO’s upcoming My Brilliant Friend. A landmark as the premium broadcaster’s first ever foreign language series produced for the US, the show was shot entirely in Italian. Regardless of language she said, “if a show is taking the viewers to a unique, special world they never thought of it can play out in the mainstream.”

As well as many of Europe and the US’s biggest players, international groups like Globo had strong showings last week. The Brazilian giant presented a fresh new slate of 12 scripted series designed to appeal to Western palates.

Gender was of course also a big talking point. FremantleMedia’s Sarah Doole said that the need for more strong female characters was just as commercial as it was political. “It’s about viewers’ needs and wants,” she said, “they want women there driving the narrative forward… not serving the other characters’ drinks.”

Written and directed by women, based on a book by a female author, and featuring a predominately female cast, FremantleMedia Australia’s anticipated Picnic at Hanging Rock was one of the most impressive shows screened at the festival. Speaking before the premiere, star and Game of Thrones alum Natalie Dormer said the simmeringly intense mystery thriller featured “sexiness not through the male gaze. It’s sexiness through female sexuality. It’s sensual.”

With more professional attendees from the TV industry than ever before, there was talk that the Berlinale could become a major market

The Scandi sessions were dominated by discussion of the evolution of noir. Ivar Køhn from NRK talked of a lightening of mood, calling the new strain ‘nordic light’ – “it has the same filmic qualities, it’s still about the characters, but it’s not about crime, it’s much broader.”

Examples included DR’s extremely promising Liberty – about Danish expats doing aid work in Tanzania in the 1980s. A vibrant multi-stranded saga of family and culture clash, it offered a welcome departure from the grey and gloom we’ve traditionally seen from Northern Europe over the past few years.

NRK’s real-time dramedy One Night meanwhile uses 10 x 30’ episodes to tell the story of a first date from beginning to end. Two versions have been filmed – one in Norwegian and one in English.

ZDF’s online thriller Wishlist has been a bona fide phenomenon in Germany, and scooped a number of top TV awards after streaming on Facebook and YouTube. The show is a result of the broadcaster going directly to local YouTubers and asking them to submit ideas for short form online content. There was a big emphasis on ZDF being hands off with the show and leaving the young creators to authentically craft the show without outside input.