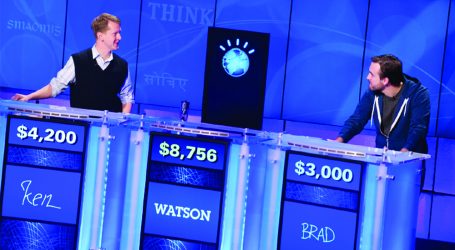 In a world full of data, Artificial Intelligence (AI) will help us derive real meaning and insight from the mass of information that surrounds us. In the final weeks of 2017 it was announced that Google’s AI team, in collaboration with NASA, manipulated a vast amount of data to discover an undiscovered planet. But the applications go way beyond the interplanetary – such computing power is going to make a seismic difference to our day-to-day lives. As ever, TV will reflect this shift, both in what we watch and how those shows are made.

What evolved into the AI technology we see today, bizarrely, originated in TV; IBM’s Watson was specifically designed to answer questions in Jeopardy!, famously going on to beat a human. That system is now the leading AI platform on the planet — how’s that for a TV spin-off?

Endemol Shine Group is already experimenting with AI in content creation. Speaking at the IABM Annual Conference in December Lisa Perrin, the group’s CEO of Creative Networks, discussed how production on its classic Big Brother franchise is being reinvented through big data; with facial recognition, heart rate monitoring and automatic transcripts bringing new levels of creative freedom to production teams.

Similarly, the BBC is laying the groundwork for an AI-enhanced future. The pubcaster’s Chief Technology Officer Matthew Postgate recently revealed that thousands of comedy panel shows were analysed using machine learning, and as a result an AI could ‘direct’ its own shows in the genre. And at a consumer level, the BBC is also using the technology to improve recommendations on its on-demand platform, iPlayer.
It’s not surprising, given the amount of coverage the technology is receiving across media, that programme makers are tapping this zeitgeist by incorporating AI within a number of new formats.

China’s Mum, Mate, Computer Date (a Syco and Canxing co-pro) mines big data to see if a computer can decide a better love-match than a singleton’s mother or close friend, whilst another high-profile production from China, CCTV’s Mission AI pits AI systems against human experts to see who is better in their equivalent disciplines.

Meanwhile in the UK, Channel 4’s The Robot Will See You Now (C4) sees AI-bot Jess dispensing life-changing suggestions to individuals, offering frank recommendations based upon their social media accounts, emails, online purchases and bank accounts. Armed with all that intelligence and processing power, Jess dishes out comments that are a million miles away from the caring, sharing experts we’ve become accustomed to in the genre.

The old adage that the camera never lies is about to be shattered through advancing technology.

Whilst Jess might be the most honest thing we’ve seen on TV for quite some time, AI is developing a far more sinister side in the world of video. As we showcased in the December 2017 Digital Quicklist, researchers working for chip maker Nvidia are using machine learning to manipulate video footage, providing examples whereby the weather in a particular scene could be changed from stormy to sunny, or parts of the environment could be convincingly removed and replaced. The old adage that the camera never lies is about to be shattered through advancing technology.

As you’ve come to expect, here at K7 we don’t stand by the sidelines as the world evolves. That’s why we’re also looking very closely at how machine learning and artificial intelligence can further enhance the services we offer, and we’ll be updating on our journey into the future…a little further into the future.